Bourke-White is known for several achievements at once. In 1930, she became the first Western photographer who was allowed to visit the industrial sites of the USSR, so her photographs are of particular value for history. And after that, she was invited to work in Life magazine, where she became the first female photojournalist in history.

One of the pictures she took for Life during the construction of the Fort Peck Dam ended up on a US postage stamp. 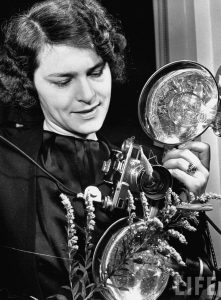 Margaret Bourke-White has photographed all over the world, one of her most famous photographs is a portrait of Gandhi.

Her contributions to history did not end there, for during World War II she was the first woman war journalist and the first woman to be allowed to work at the front. She was also the only foreign photographer present during the German attack on Moscow.

Margaret Bourke-White created classic reportage photographs that captured the environment and the essence of the characters. Her pictures have always been layered and emotional. Her work is held in several US museums and the Library of Congress.