In 1890, Stieglitz returned to New York after studying in Germany to prove that photography was no less a subject of art than painting or sculpture. As editor of Camera Notes magazine, he sought to convey to readers the aesthetic potential of this medium. In 1902, Stiglitz and a group of like-minded people broke away from the editorial board of the magazine and created their own movement.

Photo-Secession. The group shot documentary and reportage photos, often depicting the life of the lower strata of society. 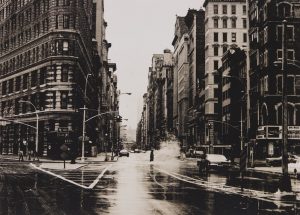 Stiglitz is considered one of the greatest masters of pictorialism, that is, the convergence of the style of photography with painting.

Throughout the life of a photographer, his approach to realizing and proving his own ideas has changed systematically, hence the constantly progressive changes in style.

Among Stiglitz’s experimental photographs, there are several related to early solarization. Most historians believe that Stieglitz deliberately overexposed his shots, but solarization was only a side effect.

Stiglitz’s works have not only social, but also artistic value. Therefore, every photographer should know about them.